Skip to content
Aaaaaand…..
The patience continues waiting on my fabric to arrive.
BUT!
On Tuesday, I got an email from the website I ordered it from letting me know that it has
indeed
shipped!!!
Woohoo!
So, now it should be here any day.
Hopefully tomorrow.
And in this experience, I have learned yet another plain and simple truth
regarding patience.
Great things happen to everyone.
We just don’t know when.
I don’t know if I mentioned this or not,
but in December I got a call
from a woman named Becky.
From the Standard Examiner news publication.
She wanted to do a story on me about my winning quilt!!!
And once the interview was over, there was yet another test of patience just waiting for it to run in the paper.
The love and support I got from friends, families, and even complete strangers was just overwhelming.
They have a section of the paper called “Hers” that is all about women.
Not only did they put me on the cover, but they put me as the centerfold too!
I have never been on the cover OR centerfold of anything before. 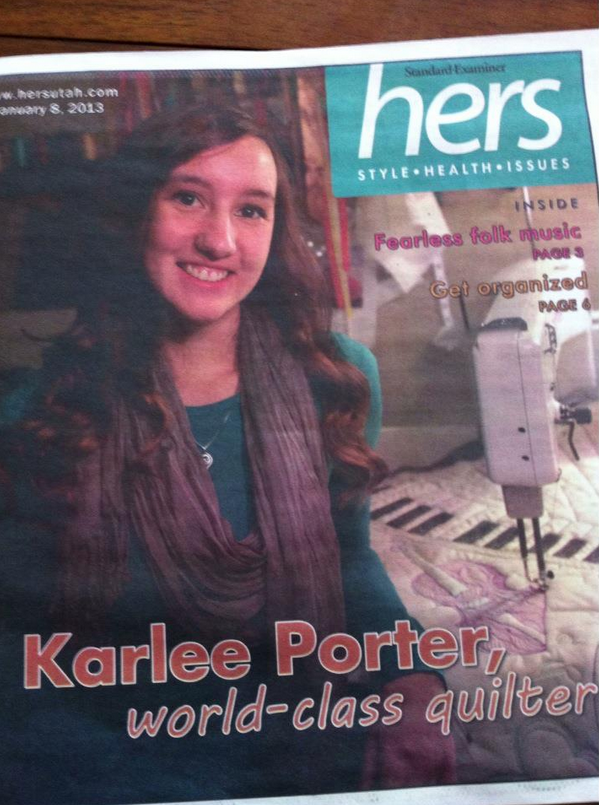 and here is the article they posted on their website…
(Sorry, I know it is a little long.)

Karlee Porter holds open her sketchbook to the most recent design she is making in a quilt.
(KERA WILLIAMS/Standard-Examiner)
Story by Becky Wright
(Standard-Examiner)
Tue, Jan 8, 2013
Karlee Porter has entered another world — a world ruled mostly by women who are famous for perfectly mitered corners and even stitching.
At just 21 years of age, Porter has worked her way into the ruling class by winning the “Create Your Style” art quilting design contest at the International Quilt Festival in Houston in November.
“Houston’s International Quilt Festival is like the mothership of all quilt shows,” Porter said. “It’s the most recognized quilt show in the world, and people come from Japan and Europe.”
Porter learned to quilt from her mother and grandmother, when she was a child.
“They would put a quilt on big wooden frames set up in the living room, and I would lie underneath. They would push a needle through the material, and I would push it back up,” she said.
She didn’t get into quilting in a serious way until 3 1/2 years ago, when she was hired by a machine-quilting business.
“When I got that job, I learned there were quilt shows and competitions — this whole other world of quilting,” she said. “I started trying to make quilts to enter into a show.”
The secret to her seemingly quick success, she says, is dedicating the time.
“I’m a big believer in that. I think we can do anything we want to, but we have to put in the time and the practice to get there,” Porter said. 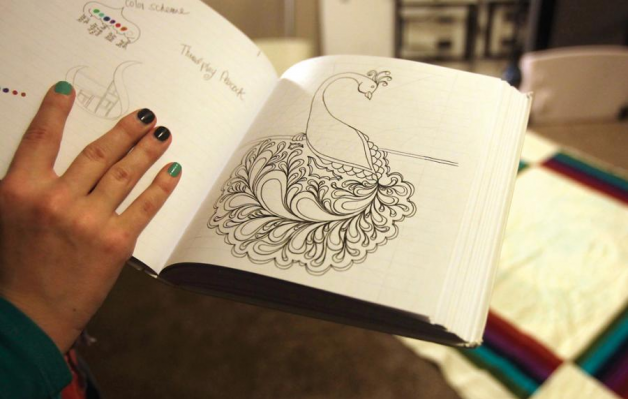 Putting in the time
Porter, of Clearfield, started machine quilting just one month after getting married.
“She’s always been very artistic,” said her husband, Andrew Porter. “When I first met her, it was posters.”
But getting the job at the quilting company gave Porter a new outlet, and soon the largest bedroom in the couple’s tiny apartment was converted into a creative studio filled with colorful materials and spools of thread.
“I’ve always had this artistic inclination, but I just didn’t know the processes,” she said.
On the job, she was immersed in quilting.
“I had people who worked there, that knew what they were talking about,” she said. “I would bring my quilts and say, ‘OK, tell me how I screwed up,’ and they would tell me.”
One small quilt, hanging on the wall of her studio, has wrinkles where it should be full.
“I used the wrong batting, so it didn’t stay puffy like it was supposed to,” she admits.
Worse still was when she stretched out the finished quilt to remove the wrinkles, and accidentally sprayed it with bleach instead of water.
“I smelled it, and I just started crying and I fell on the ground,” she remembered.
Another quilt, which required hours of hand coloring with permanent markers, had too much bonding under an appliqued piece, some wrinkling on the back, a crease where she tried to save money by piecing together two pieces of batting, and imperfect mitering on the corners.
“This quilt was really bittersweet because I love the way it’s designed, and I like the way it looks, but there were so many mishaps,” she said.
But the time she put into those quilts wasn’t wasted.
“There were huge mistakes in other quilts that led up to making a good one,” Porter said.
Last year, Porter entered a competition with the theme “Text on Textile,” at the International Quilt Festival in Houston. Her entry didn’t win, but was judged good enough to include in a two-year exhibit.
“It’s cool to have the quilt traveling around the world, and having people see it,” she said. 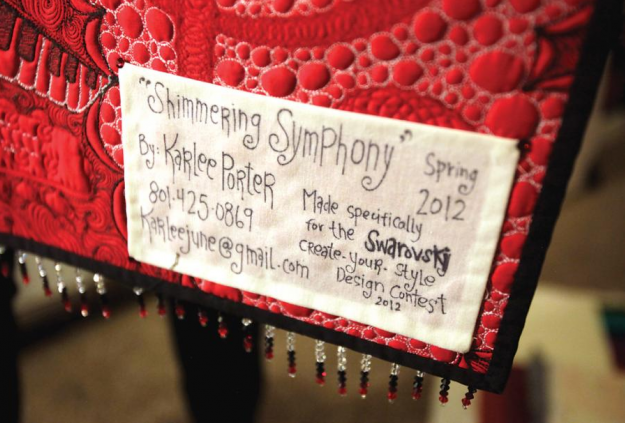 Material and music
Porter’s no longer working as a machine quilter. She’s in business administration, and going to school part time — hoping to study art and graphic design, with an emphasis on textiles.
“I’m definitely not going to stop quilting,” she said.
A friend pointed out the “Create Your Style” art quilting design contest.
“When I found out the theme was based around music, I thought, ‘I definitely have to do this,’ ” she said. “I’m an artist, and also musically inclined, so I thought it would be cool to do a quilt where I’m really passionate about the theme.”
Porter has been playing piano, mostly by ear, since she was little. She added violin in grade school, and recently took up guitar and ukulele. These instruments — except the uke — were incorporated into her quilt design, along with some of the symbols of written music.
The entry, “Shimmering Symphony,” was quilted on ivory material, with black and red thread. The contest was sponsored in part by Swarovski Elements, so Porter incorporated tiny crystals throughout the quilt.
“I put in about 120 hours, and almost $200 in supplies,” she said.
The quilt was completed by the June deadline and, as instructed, Porter sent two photos: one of the overall quilt and a close-up detail shot.
Judges placed her quilt in the top 30, so she was asked to send the real thing for inspection.
“From that point, they picked the top 10,” said Porter, admitting that she was pretty excited to still be in the running. “You want to win, but who knows what else is out there? I tried not to psych myself up about it.” 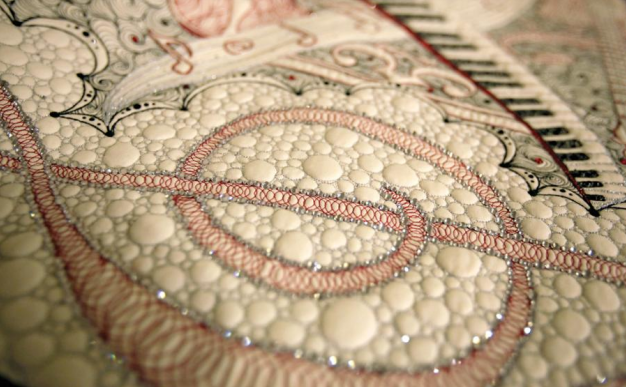 Shipping out
Porter wanted to go to Houston for the festival and the announcement of winners, but money was tight.
She decided to sell some quilted cosmetic bags that she’d made, so she carried them with her as she traveled back and forth to work on FrontRunner. Unfortunately, distracted by a book, phone and carrying several items, she left the cosmetic bags on the train — dozens of them. And they were never turned in to lost and found.
“It was the worst,” Porter said.
But with fundraising support from friends and family, and an uncle in Texas who offered a room, she made it to Houston.
Looking at the quilts in competition against her, Porter recognized some prominent names.
“In the quilting world, they’re a set of celebrities — everybody knows their names, and they have classes and books,” Porter said. “I was like, ‘Why did I even come?’ I was feeling self-conscious because I wasn’t used to being next to these very well-known quilters.”
She was overwhelmed when she was announced as the winner.
“I just started crying and laughing at the same time,” she said. “It was a good feeling to be up against such beautiful quilts by amazing quilters, and be held to the same standard.”
For her win, Porter brought home a $3,500 check, a gift bag of Swarovski products worth $3,500, and a $2,600 Pfaff sewing machine. 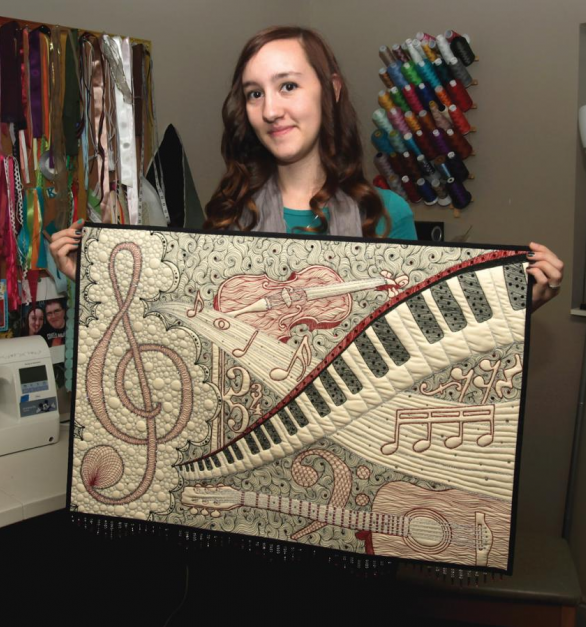 Project person
Porter is now working on a new quilt for competition — a peacock design from the idea sketchbook she always carries.
She also has a special project in mind. For every month of 2013, she wants to create a new quilt with a motivational message. At the end of the year, she’d like to combine photos of the quilts with blogs written about them, to create a book to sell for charity.
“I love project people — people who the only reason they do something is to make the community better,” said Porter. “I want to be that kind of person.”
Someday, she wants to finish college, but for now she’s putting in her time in the quilting world.
“I have so much to offer, and I want to share the talents that I’ve been blessed with to help other people — to encourage other people to be artistic and creative, and to use any talent they have,” she said.
_________________________________
So there you have it!
I am so thankful for the opportunities I have been given to share my talents with other people.
And I have learned a lot about patience so far this month.
I am sure there is more to come.
I think everyone has a chance to learn how to not only be patient, but to stop a take a minute once in a while and just enjoy what is going on RIGHT NOW.
My fabric will be here soon.
Here is another little clue to “tide you over”. 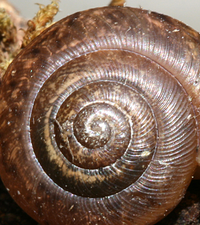 I can’t wait to show you!
But really…I can wait.
See! I’m getting more patient all the time!
Be great to each other.
-Karlee

Today is another quilt competition deadline. This competition really enticed me because it is designated for “Young Textile Artists” and you can […] 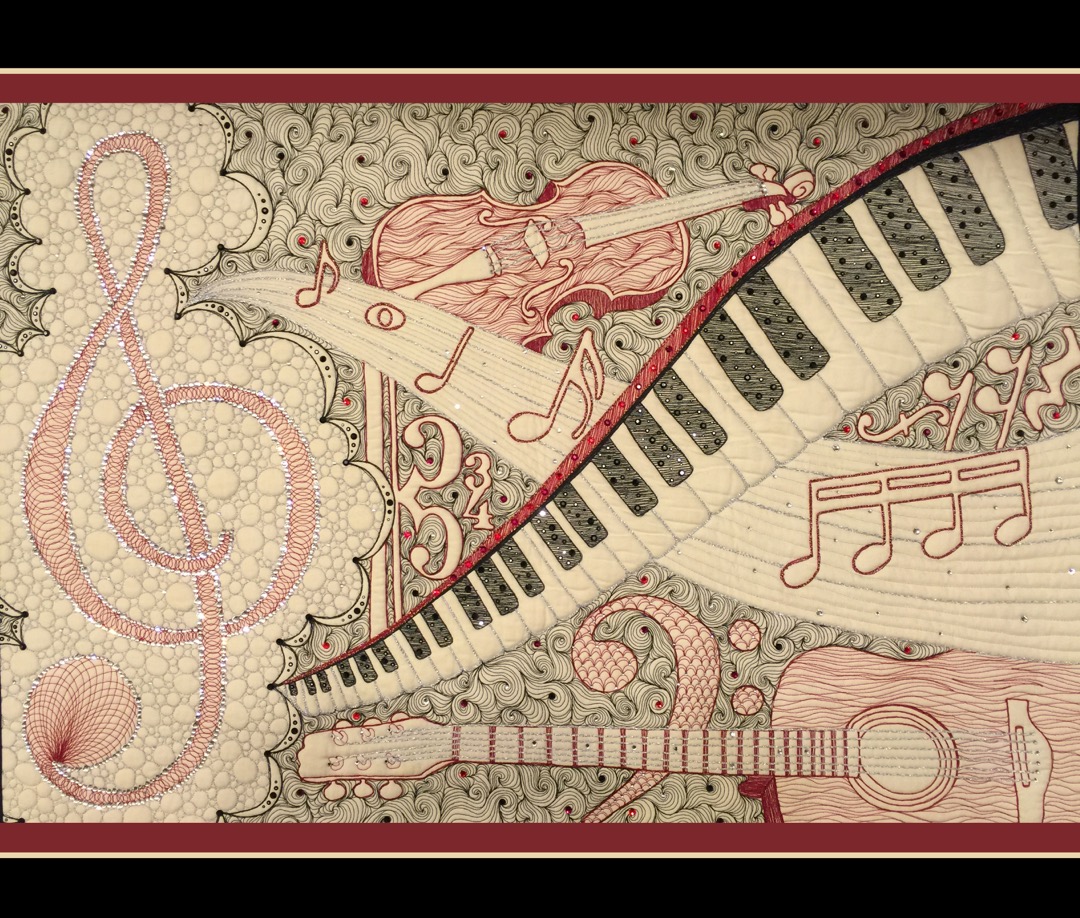 5 Years ago, I created this quilt: I had just gotten into free-motion quilting but as many of you know I had […] 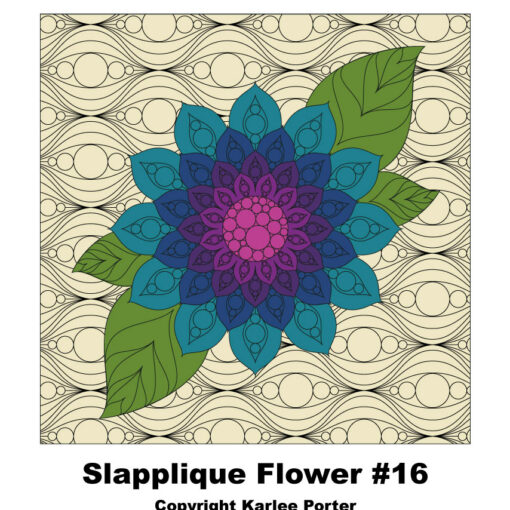 Check out this fun video I made to show you how to use the designs in my Slappliqué Flower Collection! Also, should […]

There are 2 things in this world that I ABSOLUTELY love. Quilting. (duh.) and Graffiti. I will say this, I was never […]